We breed our own queens with genetics from Russian, VSH, and Carniolan.  Queens selected as grafting mothers have survived at least two winters here in Vermont. None of our colonies are treated with miticides or other medications, and potential breeders are selected based on low mite counts, high honey production, overwintering and good behavior.  See the section on untreated bees for more information. 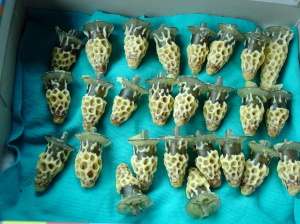 Queens are mated in nucs in an area surrounded by target drone producing colonies for drone saturation. This keeps the desired traits in the genetic mix. Each queen stays in the mating nuc for a full 3-4 weeks. This allows the queen to achieve peak pheremone production, leading to increased success upon introduction to a new colony.

Queens are available in June, July and early August. Exact dates will depend on weather and other circumstances.  Queens are available for pickup here in Cornwall and from Betterbee if you need them shipped.  Contact them at  www.betterbee.com  to order your queens.

What to do with a summer queen: Many people desire to have a queen early in the spring when they see a colony failing that could be saved by a new queen. At this time of year, only Southern queens are available, and are therefore the only option. However, Southern queens do not survive well in the North leading to excessive winter mortality when Southern queens are used. Attempts to mate queens early in the season in the North lead to poorly mated queens due to frequent inclement weather and low drone production that early. So we recommend that you adjust your management to the summertime availability of the Northern queens.

The best ways to use a summer queen are:

A-In a split. Hedge your bets on your wintering by making a split during the summer. Remove 2-4 frames of bees and brood in all stages along with a frame of honey and pollen and place them in an empty box. They can come from one strong colony or several. Make sure you do not get any queens in the split. The next day, place your new queen in her cage between two brood frames. Close the split up. Check it in a week or two to make sure the queen is out and laying. Allow it to build up over the summer. Depending on how strong you made it, it may need a 2nd box, or you may be able to winter it in a single box. This split is then available in the spring to requeen or replace a poor colony or deadout. No Southern bees needed.

B-To requeen a colony. In each beeyard there are always one or two colonies that looked good, but have only one super when all the others have four or five. They never get better. Best to requeen them while they are on a honey flow. Make up a split, as above, but place it on a divider board (an inner cover with the hole duct taped over works well) above the main hive, with the entrance facing backwards. Leave the old queen below. Place any supers above the split or above an excluder above the queen box. Put the queen cage between the top bars of two brood frames in the split box. After the bees in the split have accepted the new queen, go through the box below, find the old queen, and pinch her off. Combine the two boxes with a sheet of newspaper, and you are all set. This can even be done on the fall flow.